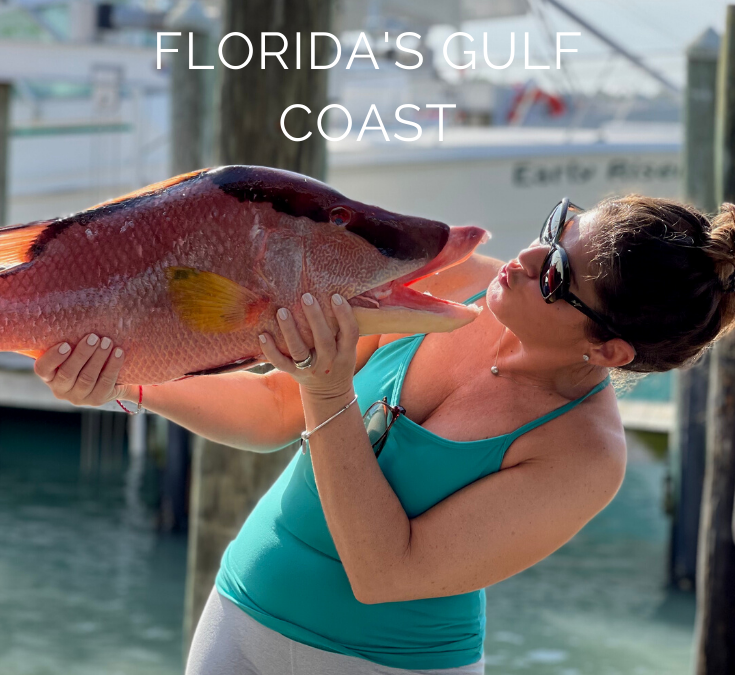 Natalia traveled in April 2021 to Madeira Beach in Saint Petersburg, Florida on the Gulf Coast for a surprise birthday celebration with her best friend and sisters!

When Natalia travels, her style is to mix with the locals, get to know them and find local faire to enjoy. Her trip to Florida was no different!

Natalia describes the trip and the scene…

I started researching the local area of Madeira Beach and quickly came to realize that it was a beautiful resort town and but I was not so much into the local food at the resorts. So I wanted to find out what is local to the Gulf Coast of Florida…I started asking several locals what their local fish and food is while looking up the different fish markets in the area online. One common thing brought up by all the locals and my “Google” search was that I had to find and try stone crab, pink shrimp and hog fish. So I made it my mission to find these three items and cook them at the house that we were staying at on Madeira Beach. I came across what I thought was a fish market on Treasure Island and to my surprise when I got there it’s a dock for local boats to unload their fresh catch from the previous day of going out (in a storm by the way).

I had called the fish market (Wild Seafood Market at Don’s Dock) earlier that morning to find out if they had hog fish, stone crab and pink shrimp and the man on the phone said yes! So I got in the car with my best friend Liz and drove over to the docks. When I arrived there was this guy on the dock and I asked him where the fish market was and he took me in this place that really had nothing except for what was in its freezer section…which happened to be the pink shrimp so I ended up buying 3 pounds! And then I asked him about the stone crab…he keeps the stone crab in a cooler behind the counter. He had both large and small stone crabs and I ended up getting the large (about 2 pounds of it). While he was packaging my order I went outside to look around and I see bins of fish on the dock! So I proceeded to ask the girl that was doing some of the work what kind of fish this was and if they had “hog fish”. She said yes, and took me over to the bin that had the hog fish. But then I see a boat that is being unloaded of all the fish right then and there, so I quickly turned to them and ask them what kind of fish are they unloading and what are they gonna do with all that fish! I also started asking the guys on the boat questions like how long have they been out and the captain of the boat said they left yesterday. I replied in surprise, “you went out in the storm” and he said, “there is nothing we can do about it once you’re out there”. I then asked the girl working on the fish what she was doing with the fish and she told me that as it comes off the boat they separated into these bins and they tag it with their own tag. In the meantime, Chris the gentleman in the fish market that was helping me comes outside to tell me my order is ready. Now I ask him about the tags on the fish (Gulf Wild) and he elaborated by saying there’s a barcode on here and if you go online in six hours you will be able to see where this fish is going. I then asked the fishermen where it was going and they said it was going to Alabama. I found it very interesting that the hog fish I purchased was line caught not caught by nets. Chris explained to me that they cannot use nets in that area, since the mid 90s, and the hog fish has to be a pole caught – which I thought was incredibly interesting. I picked out a hog fish from the bins of freshly unloaded and tagged fish and Chris proceeds to take the hog fish over to the table outside on the dock where he then scales and guts the hog fish for me. He also showed me the hole where the fish was hooked. As soon as he started cleaning the fish we were surrounded by birds. He would throw the parts of the fish that were being discarded into the water and the birds would go crazy feasting on it.

So I take my hog fish, stone crab and pink shrimp and head back to the rental house on Madeira Beach. On the ride back Liz (my best friend) was asking me how I was going to cook the hog fish. Honestly! There were many scenarios going through in my mind when Chris was cleaning the hog fish back at the dock. The fish we were bringing back to the house to cook was a very large, heavy fish – about 8 pounds. Once we got back to the house I looked around to see what we had to work with. I wanted to simply use the rest of the ingredients we had on hand because we were leaving the next day and we didn’t want to go out and buy more ingredients. We had leftover cilantro, parsley, a jalapeño, green onions, a head and a half of garlic along with salt, pepper, olive oil and lots of lemons and limes….which, quite frankly, is all I need to roast this hog fish with!

I thought about filleting the fish and grilling it, but at the same time I thought that would be a huge waste. I wanted to make sure and get the essence of what this hog fish was really like. When we were on the docks I had asked Chris what the hog fish is like and he said it’s very mild, light and ice white – which I thought was an interesting term to describe the color of a fish but I totally got what he meant by that. So I decided to respect the fact that this is an amazing fish and at the last minute I chose to roast it whole because my sister was going to make roasted sweet potatoes and I thought since we’re going to have the oven on let’s do the fish that way too.

I cut the fish in a way that after it was baked it would just come off in these huge chunks. So I cut it along the dorsal fin under the belly and then slicing it straight across.  I then combined all the ingredients we had left over in a blender to create a marinade. I added that marinade to the fish on the inside of the fish as well as outside the fish and then added some slices of lemon.

By the way, as I was prepping the hog fish, my sister came into the kitchen and said we should probably save that fish head for dad…he could make a great fish soup out of it! I looked around the room and realized that we were most likely not going to be eating that fish head and my sister was right…my dad would love fish head that for a wonderful fish soup that he makes. So I proceeded to cut off the head and put it in a Ziplock and threw it in the freezer so the next day when we all left my sisters could take it to my father. FYI, my sisters live in Florida and were driving back home so they threw it into their cooler the next day to take to dad who was at their house visiting.

To cook the hog fish, I put the fish in the oven that was already heated to about 450 for approximately 35 minutes.
While the fish was in the oven we still had things we had to get rid of so I minced up the rest of the cilantro and the parsley, added some lemon and lime, some olive oil, salt and basically made a vinaigrette.

When the fish came out of the oven roasted the outside was beautifully crisp and the inside was exactly as Chris had described – a white, mild flaky and absolutely delicious fish! I think roasting it a whole that way definitely made it so that you got a sense of how delicious this fish really is and maybe underrated in many ways.

Pour Marinade inside and outside Hog Fish and massage in.

We served the whole roasted hog fish with my sister‘s baked sweet potatoes which she laid on top of thyme and baked for about 35 minutes as well. It was a perfect pairing. We had Frogs Leap Sauvignon Blanc wine from California.

We also devoured the stone crab, which was phenomenal. It was absolutely delicious and it’s somewhat like the rock crab we have in New England (where I live)… but oh so much better! All I had to do with the stone crab was quickly steam them. Chris had told me that as soon as they get those stone crab claws they have to be cooked within a few hours or else the meat sticks to the shell.  I made a simple dipping sauce of melted butter with about a clove of finely minced garlic and added a couple dashes of hot sauce and lemon and it was fantastic with the stone crab.

The pink shrimp I simply sautéed with the rest of the garlic and butter with a couple tablespoons of olive oil, salt and pepper with a couple dashes of hot sauce and lots of lemon in the finish.  It was definitely a sweeter shrimp and it was fabulous!

If I go back to this area I will absolutely go back to that dock and try a different fish so that I get to learn a little bit more of what other fish come from the gulf coast and what I like.

This trip was an absolute fantastic weekend girls getaway. My favorite part was hanging out with all of them at the rental house and lounging on the beach, hanging out by the pool, and just being together. We laughed and shared stories while having cocktails on the beach. One of the best nights was Saturday night. We found a place called The Hut on Treasure Island where they had live music. It was pouring that day so this was a perfect night out.
When we left the hut and went back to the house my sister pulled out the karaoke machine (which is something I’ve never done) – well I have to say it was the most fun that we have had in a really long time…everyone sang, danced, laughed and cried! It was the best.